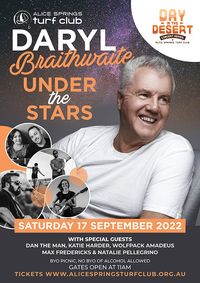 Enjoy Daryl Braithwaite in concert under the desert sky on Saturday 17 September 2022. With special guests, Katie Harder, Dan the Man, Max Fredericks and Natalie Pellegrino and Wolfpack Amadeus. Gates open at 11am. Free buses from the Alice Springs Convention Centre.

Daryl Braithwaite is an iconic Australian singer/songwriter and ARIA Hall Of Fame Inductee. As the front man and vocalist for 1970’s band Sherbet, Braithwaite rode a wave of local and international success with songs such as Howzat and Summer Love propelling the band the band to superstar status. Braithwaite went on to embark on a highly successful solo career which included a #1 ARIA Album Chart for his album Edge (1988) featuring the hit singles As The Days Go By and One Summer. Braithwaite’s 1990 follow up album Rise included the single The Horses which reached #1 on the ARIA Singles Chart and to this day remains an anthem for generations of Australians. In 2020, Braithwaite joined a host of local and international artists to perform at Fire Fight Australia, Concert For National Bushfire Relief in front of an audience in excess of 70,000 at Sydney’s ANZ Stadium.

Katie Harder and the Artful Dodgers with Kemy Ogendi

Night 2 of the Festival Club as part of the Desert Song Festival. Join Katie Harder and the Artful Dodgers and Kemy Ogendi for a fantastic night of music between the hills and under the stars. Dress warm as we are outside Food Available from Yaya's from 6. Araluen Bar open from 7.30 Music starts at 7.30 Tickets available at the door $15

Bill Chambers is coming back to Alice & will be live in the Shooting Gallery at Montes supported by our very own Katie Harder! If you’ve been in the audience at a Bill Chambers concert you’ll notice he always travels with a swag of guitars showcasing his connection to different styles of music that he’s been influenced by over the years. “I grew up listening to the Hillbilly music my mum and dad played when i was a kid. I discovered early Rock’n’Roll,

Red Hot Arts Central Australia opens its cosy arts space for Winter Chill – two nights of stories, music and campfire chats under the stars and in our converted workshop space and backyard. Each night will feature a changing lineup of NT musicians, spoken word artists and filmmakers. Come sample some mouth-watering and heart-warming treats, tales and tunes under the stars. When: 16 & 23 July Time: 5PM – 9PM At: Red Hot Arts, 67 Bath Street. Tickets: $15 at door. Hot food and drinks available for purchase. PLEASE NOTE THIS IS A CASHLESS EVENT 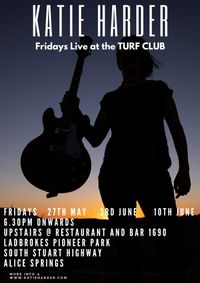 I'll be playing live for the next 3 Fridays upstairs at the new 1690 restaurant and deck bar, overlooking the magnificent setting sun on the Alice's West Mac Ranges. Dates Include: 27th May 3rd June 10th June Music from 6.30 pm. A collections of Old and Brand new originals along with a mix of Katie's favourite covers infused with that familiar Katie Harder flavour. Occasional special guests will accompany. For more info and booking please visit https://www.alicespringsturfclub.org.au/sixteen-ninety

Katie Harder and Friends - Live on the Lawns

Enjoy your lunch on the lawns surrounding the Old Courthouse, the new home of MusicNT in Mparntwe, on the last Friday of the month between now and September. Sample live sounds from some of Alice Springs finest original musicians. May 27: Katie Harder June 24: Karnage N Darknis July 29: TBC August 26: TBC September 30: TBC Funded thanks to the Australian Government's Regional Arts Fund, which supports the arts in regional and remote Australia

Alice’s Longest Desert Lunch now takes pride of place as the premier food and wine occasion in Central Australia with the leaders in the restaurant and catering industry, showcasing to the world just what Alice has to offer. This is our own dining extravaganza, supporting the ongoing operation and growth of the Hamilton Downs Camp, a not for profit community organisation that provides a bush destination primarily for youth, also a great venue for other private functions and corporate groups. The annual celebration of food held in Alice Springs is back - now moved to Olive Pink Botanical Garden. The major fundraiser for Hamilton Downs Youth Camp and a Do Not Miss on the local social calendar. Your ticket includes an exquisite meal over various courses from your chosen caterer complemented by a package of wine, beer and soft drinks. Performances during the event by Katie Harder and Benny Heaslip. For more information please visit https://fb.me/e/2x3Ft9OWd 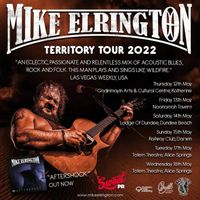 Looking forwards to supporting Mike Elrington Totem Theatre for his Territory Tour 2022. It's so great to have traveling musicians visit us here in Alice Springs again. So so lucky to have him here. Book your tickets below. Doors open @ 7 See ya there. 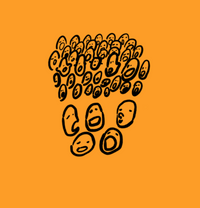 The event will wrap up with an epic performance of the song which was learned in the free Alice Sings Workshop prior.

To get the most out of this experience, attendees of Gotcha Covered are encouraged to attend the free Alice Sings Workshop on at 2.00pm in the Totem Courtyard. 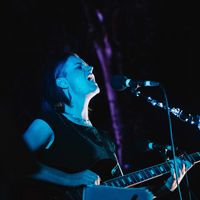 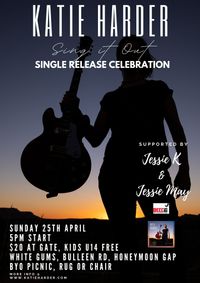 Katie Harder and her band 'The Artful Dodgers' invite you to a picnic gig on the grass at White Gums to celebrate the release of Katie's latest single 'Sing It Out'. Supported by the sultry tunes of Jessie K and Jessie May. Broadcast live through 8CCC 102.1FM on the evening.
Stream live through https://8ccc.com.au anywhere in Australia from 4.40pm AEST and 5.10 NT.

Listen or Buy sing it out: www.katieharder.com

Come and celebrate the launch of First Light and Rest + Resist with a backyard gig. There will be snags and beautiful tunes as the sun sets. Come from 7 to hear Katie Harder supporting. Entry $15, kids free. If cost is a barrier, please DM and we'll pop your name on the door. Tickets at the door. www.facebook.com/events/177254283983054

She Sings: The Fire Within 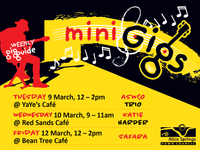 Live acoustic sessions with some of the NT's best musos supported by Alice Springs Town Council. 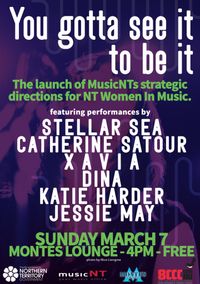 You gotta see it to be it

The launch of MusicNT's strategic directions for NT Women in music. Killer line up of musicians being showcased...including Katie Harder, Stellar Sea, Xavia, Dina and Jessie May. 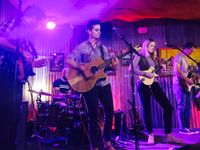 Katie Harder and the Artful Dodgers

Hey Folks, been away from the red centre for a few months but will be heading back in September to play the Desert Song Festival with my wonderful band. Its our only show of the year so make sure you get on down. Looking forwards to sharing stories and songs with you all and seeing your smiling faces again. It was the highlight of my year last year...playing this festival. Lets do it again!! This is a child friendly event. BYO alcohol, meals can be ordered at the event. Tickets $10 at the door

Don't miss this opportunity at 'Desert Song Central' to enjoy Katie Harder and her wonderfully talented Artful Dodgers, as they take you on a musical journey through story and song.

$10 at the Door BYO Alcohol Meals available at the venue